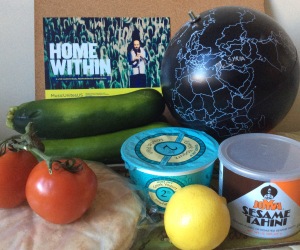 Like our detours to Iceland and Bulgaria earlier in the year, our detour to Syria came about because we had learned of a special cultural event happening nearby. This time, the event was a MusicUnitesUs concert at Brandeis University called Home Within: A Live Audiovisual Performance from Syria. (Our very first globetrotting detour, to Mali, was also occasioned by a concert in the MusicUnitesUs series.) But underlying the beauty of the Syrian concert program, as well as our weekend itself, was an awareness of the acute suffering that the Syrian people now face in a country torn apart by civil war.

We started our Middle-Eastern adventure on Friday evening by watching a 2004 Israeli drama called The Syrian Bride, which tells the story of a bride who lives in the Golan Heights and her journey across the border to meet her new husband, who lives in Syria. Most of the characters in the film belong to the Druze faith, an Abrahamic faith whose followers live mainly in Lebanon, Syria, and Israel. Here’s a preview:

This was plenty of food for two globetrotters, but Jess had learned (here) that an even more sumptuous spread is not uncommon for larger gatherings.

Later on, we watched a short film from UNESCO entitled “Help Save the Cultural Heritage of Syria” (2013), detailing the many archeological treasures that now lie in harm’s way as well as the international efforts to save them:

After popping out to the local co-op for a teaspoon of allspice, I spent much of the morning preparing some kousa mahshi, or stuffed zucchini, for lunch. This dish is traditionally made with small Lebanese zucchini and minced beef, but for our vegetarian version we substituted larger American zucchini and some crushed chickpeas:

We traveled to Brandeis on Saturday evening for the concert, stopping for dinner at a Mediterranean/Persian restaurant in downtown Waltham called The Grill. We hadn’t been sitting long when the waitress brought over some warm pita and a pot of oh-so-creamy hummus: 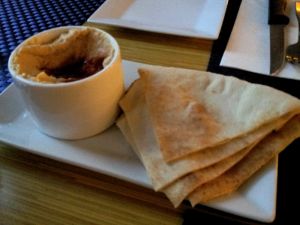 Because the restaurant offered a relatively broad range of Middle-Eastern foods, we had earlier made sure to compare the menu to a description of Syrian cuisine from Wikipedia in order to identify some plausible Syrian entrées. Jess succeeded in choosing a Syrian favorite, falafel, which you can see below on the left. My dish, the beef shish kabob and rice pilaf on the right, seems unfortunately to have been more Turkish than Syrian in origin—though other types of kabob are associated with the country. 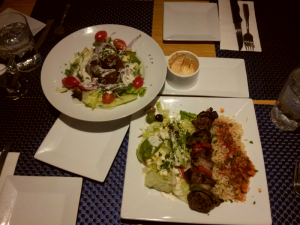 Before the performance began, we attended a pre-concert lecture by British Prof. James Thompson entitled, “Art, Beauty, and War: A Short History.” His talk outlined the many ways in which artists who live through violent conflicts can respond (or not) to those conflicts with their creative work.

The performance itself began with the world premiere of Don’t RipEat after me, a short multimedia work featuring a video by filmmaker Khalil Younes with music composed by Kinan Azmeh and performed by Brandeis’s Lydian String Quartet. This was somewhat interesting, but the highlight of the evening was Home Within, an hour-long multimedia work featuring electronic music composed by Azmeh (who also appeared on stage playing the clarinet) and live painting and video by the artist Kevork Mourad. To watch Mourad paint mystical scenes right before our eyes was truly mesmerizing. This related clip hardly does the live performance justice:

The concert ended with a lavish Syrian reception (we spotted more hummus, pita, and falafel) though we left rather quickly in order to catch the shuttle bus back to Cambridge. 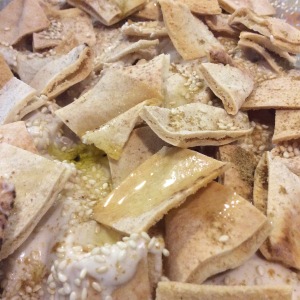 After cooking my lunch for the week—a Greek-inspired smorgasbord of bean salads, kale, and roasted vegetables that someone from Syria would probably enjoy as well—I baked a popular Syrian cake called harisi, made with semolina flour and yoghurt and drizzled with plenty of lemon-scented ater (syrup). Here’s a square:

For lunch, Jess made our final Syrian dish of the weekend: shurbat addes, a vegetarian red lentil soup. This was warm and hearty.

We then learned about the complex and tragic history of post-colonial Syria in a documentary called Syria: The Reckoning from the Al Jazeera World network.

Later that afternoon, we stopped by Moody’s Falafel Palace in nearby Central Square, where Jess ordered some baklava—a common dessert in Syria that those allergic to nuts (like me) must sadly avoid. But rather than the homemade fyllo pastry dripping with walnuts and honey that she had remembered from previous visits, Jess was handed a piece of dry, prepackaged pistachio baklava. It wasn’t even made with fyllo dough. This was a disappointment, but the weekend as a whole had brought us more than enough delicious food and culture from a country so troubled by war.

This site uses Akismet to reduce spam. Learn how your comment data is processed.