Derek and I have been in New York City since last Friday, and we’re staying with my mom and brother up until the day after Christmas. In between various family engagements (who knew that everyone wanted to see a bunch of newlyweds?), we’ve had some free time, and decided to take advantage of New York’s many cultural offerings by globetrotting. While Bahrain is next on our list alphabetically, we decided to skip ahead a little bit and try to discover Barbados in New York. We’ve been to two Caribbean countries in our Boston globetrotting already, Antigua and Barbuda, and the Bahamas, and had we globetrotted to Barbados in Boston, it would probably look very similar to our experiences with those two countries.

New York has a large West Indian population in the Crown Heights neighborhood of Brooklyn, so we were looking forward to visiting it in search of some Bajan (the colloquial term for Barbadian) culture.

Considering the chilly overcast weather we’ve been having in New York these past few days, I can understand why sunny and warm Barbados, a longtime British colony which became independent in 1966, is a popular tourist destination today. People with a sweet tooth (like myself) may be interested to know that Barbados historically was a major producer of sugarcane, which remains the country’s number one crop. R&B and pop fans may already know that singer Rihanna is a Barbados native.

While we were several months too late for the West Indian Day parade that takes place in Crown Heights every Labor Day weekend, we were hopeful about getting an authentic Bajan culinary experience. In our research, we did find a few places that seemed to offer Barbados’ national dish, coucou and flying fish, though they offered virtually nothing vegetarian and didn’t appear to have seating. Expanding our search to general Caribbean eateries, we thought we found one that had seating and offered some vegetarian entrees, called The Islands, so we decided to head there.

After taking the subway to Crown Heights for lunch, we arrived at The Islands only to discover that none of their vegetarian options were available, and that they were only doing take-out at that time. Derek tried to make the best of things by ordering the stew chicken, which came with both cabbage and something that we had encountered in the Bahamas: rice and peas. Since we couldn’t eat in, we walked over to the nearby Brooklyn Museum and Derek sampled his chicken in the front plaza. 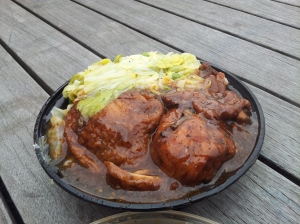 Our trip to Crown Heights would have been a disappointment had we not discovered the Golden Krust Caribbean Bakery just beside the subway station. We picked out a Bajan-style butter pound cake, a rum cake, and a Jamaican-style raisin rock cake as well as some tamarind balls before heading back to my mom’s. 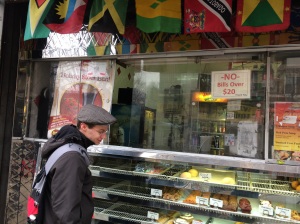 Once we got home, I devoured my half of the cakes as soon as Derek finished snapping a picture.

As a globetrotting first, we cooked for not only ourselves, but for my mom and brother as well. We wanted to make a vegetarian version of a Bajan beef stew, so we based our dish off two recipes: a non-vegetarian Bajan beef stew, and a vegan “beef” stew. On the side we made corn pie and pickled cucumber.

If you know me, it shouldn’t come as a surprise that my family’s really into food. I was nervous about presenting this meal to them, but in the end it went over well. Never one to give praise, my brother said that it was better than a big family meal we had had on Saturday at a local Italian restaurant. I’ll take it as a compliment, I guess. 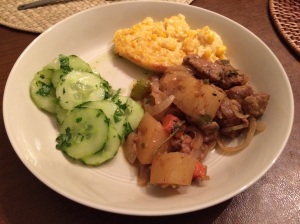 Since I had gobbled up so much of the little cakes we bought from Golden Krust, I decided to make a bigger loaf of Bajan sweet bread to share with everyone as well.

After all the cooking, eating and clean-up, it was too late to watch a movie, so we settled for watching an evening news update from Barbados Today.

We decided to take it easy the next day, since we’ve been busy every day since we arrived. For lunch, we finished the rest of the stew, corn pie, and pickled cucumber, and then watched the 1957 American film Island in the Sun. The story takes place on a fictitious island, Santa Marta, but was filmed in both Barbados and Grenada. The scenery throughout the movie is really quite beautiful, and the movie’s plot gave us some insight into white-black race relations in the Caribbean.

Even though we didn’t do well finding vegetarian-friendly Bajan food in Brooklyn, it was an interesting experience globetrotting in a city that’s not normally our home base. New York’s larger size was both an advantage and disadvantage: we had more options, but it also took us much longer to travel in between places. If we have the time, I’d love to try globetrotting to another country when we’re in New York in the future, but I’m also looking forward to trying other “B” countries back in Boston.

This site uses Akismet to reduce spam. Learn how your comment data is processed.